IF YOU MISSED CHROME CITY RIDE AT THE BENEDICINE SCHOOL,
YOU MISSED ONE HECK OF AN EVENT!

RIDGELY, Md., (July 28, 2019 ) – More than 2,100 classic cars, street rods and motorcycles from six rally points across Maryland, thundered onto the Benedictine campus in Ridgely, Md., for Chrome City Ride on Sunday, July 28. The 18th annual ride raised over $105,000 to support the more than 200 children and adults with disabilities served by Benedictine.
The annual event, organized and run by volunteers, has grown into the state’s largest ride and has helped to raise over $2 million since the ride’s inception in 2011. Now, much more than a ride, Chrome City is a way for the community to learn more about Benedictine’s mission to help children and adults with development disabilities achieve their greatest potential.
Each year students dance along with Rockin’ Elvis, and riders and participants vie for the Sister’s Choice award. This year, an orange HD Turbo Road King was the grand prize winning bike, and Ray Nails ­ with a red and silver 1954 Pontiac Star Chief ­was the grand prize car winner.

New this year, was the Kid’s Choice awards going to Donald Teat in a national grand champion Huckster, and Mike Ledbetter in his Harley Davidson motorcycle.

Generous sponsors, community partners, and volunteers continue to make the event a success year after year. Blake thanked the following businesses for helping to promote the event: CPR Classic Porsche Restoration in Easton, Outback Steakhouse in Annapolis, Rommel and Old Glory and Rommel Harley Davidson dealerships, and Hitchcock Autoworks, and for also serving as registration locations and rally points. Volunteers from Callahan’s Gas and Appliance in Centreville, Md., helped with parking the hundreds of cars on campus, along with volunteers from Choptank Transport in Preston, Md.

Each rider passed under a large U.S flag at Benedictine’s front entrance
waving from a ladder truck. Famous Dave’s provided a hot BBQ lunch
and each rider took home a collectible T­shirt printed and designed by Benedictine’s graphics department.

From Mild to Wild ~ Original to Custom

Restore a Classic or Modify it to fit your style! Easton Muscle & Custom has the passion and the talent to fulfill your dream. Give us a call!  Stop by and visit our facility and meet our craftsmen!

Our unique partnership with Porsche Restoration keeps us on the cutting edge of fabrication & design.

Take a tour and see more of our work:

Interested in Porsches and  other Classics?  Visit our Porsche Sales site: 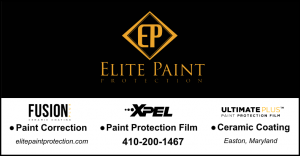 Sign Up For News, Events and Flash Sales Specials!

We send out periodic mailings of current events, Flash Sales & specials to our loyal patrons. Sign up below!

Sign Up For News, Events and Flash Sales Specials!

We send out periodic mailings of current events, Flash Sales & specials to our loyal patrons. Sign up below!

Just in For Sale

Easton Muscle & Custom makes every effort to include accurate, complete and current information on this website. However, the information on this website, is provided "AS IS", without warranty of any kind - either expressed or implied. Easton Muscle & Custom shall have no responsibility for errors or omissions in this website content. Verification, of vehicle details and specifications, is the sole responsibility of the buyer on his inspection.